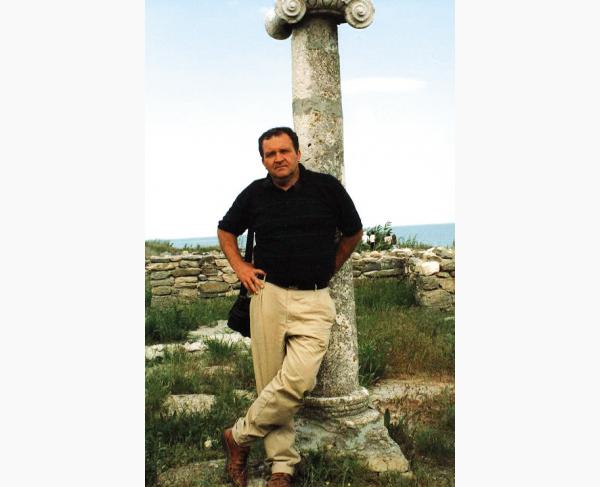 D-r Mitko Madjarov was born on 7th April 1955 in Pleven. He graduated the university “ St. St. Cirri and Melodious” in Veliko Turnovo. Since 1976 he has been working in the Archaeological museum in Hissarja. He is occupied with the problems of the earlychristian archaeology, roman and earlybyzantine fortification, development of the settlement set-up, town – planning and architecture during the roman and earlybyzantine epoch. Since 1980 he began to examine closely the roman road system on the territory of Republic of Bulgaria. In 1989 he took his doctor’s degree on theme “Roman road Oescus – Philippopol (I – VI C)” and in 1990 he has been appointed by competition a director of the Archaeological museum in Hissarja. He participated in the archaeological excavations of the important archaeological objects: the roman ceramic centre in Pavlikeni, the roman towns Nikopolis ad Istrum and Nikopolis ad Nestum. He is a sitting member of the research team of the roman and earlybyzantine town of Diocletianopol. Since 1982 he organises and supervises expeditions and archaeological excavations for researching a number of roman roads, road stations and settlements in Bulgaria. He participated in the earlychristian archaeology congresses in 1986 in Lion (France) and in 1991 in Bon (Germany). In 1997 he is a Bulgarian representative in the preparation and publishing of the earlychristian encyclopaedia in Chicago (USA).
Since 1990 d-r Madjarov is a supervisor of the archaeological studying in Diocletianopol and a director of the National Archaeological Preserve and museum in Hissarja. He has rendered great services to the preservation and conservation of the archaeological monuments in the Hissarja reservation. He has over 30 scientific publications.